I’m being so serious when I say don’t move out. DON’T DO IT. All I did was waste a bunch of money. I moved out of my parents’ house (twice). I also came back home (twice). I have no shame when it comes to saving money. First, I have to explain what happened when I moved out, so you can understand how I came to this decision and why I’m such a firm believer in staying home for as long as your parents will allow it.

Mistake No. 1: I was 18 and had just graduated high school. I wanted to live out my college dream. (Which was very short lived.) I moved into a dorm on campus with a randomly assigned roommate. We shared a tiny dorm room that had twin sized beds and awful lighting. It cost about $800 a month. It only took me three months to realize how incredibly stupid it was. I could easily afford a decent apartment (that didn’t include an inconsiderate roommate who would bring her male friends over while I was in a towel, and make me change behind a closet door) for $800 a month. So I broke my agreement with the university, and moved back home. My parents were ecstatic. (I was only 18, so it wasn’t awful or lame for me to live at home.)

Mistake No. 2: I was 19 and had had it with the curfew and chores and I just wanted out! Pouty face* A friend and I decided to get an apartment together, we’d been hanging out a few months and I figured I knew her well enough. (I don’t advise this to anyone, it rarely works out) Anyway the first few months were fine. We had a nice apartment with a pool and gym access. We knew people who could get us alcohol so we basically had it made. Anyway, my roommate (she who must not be named) moved her boyfriend in, who I wasn’t very fond of. Anyway, I suggested he pay part of the rent since he was living with us. All hell broke loose. Apparently that request was absolutely absurd and how DARE I ask him to pay rent when he sometimes supplies beer?! Needless to say, that lease was also broken, the friendship was damaged, and I came back home, AGAIN.

Now, this second move back home, I realized I should’ve never left. And I wasn’t a loser for living at home, I was smart. Here’s why:

Anyway, these are only three of the seriously good reasons to stay at home. Save your time, money and your sanity. Granted, if your parents are trying to kick you out, maybe you should go. But if they want maybe a couple hundred dollars in rent, you’re honestly better off forking it over than signing a lease elsewhere.

Okay, okay. It didn’t entirely suck. But it wasn’t the traditional college experience.
Unlike a lot of my classmates, I didn’t move away to college. I didn’t live on campus, or even in an apartment nearby. I didn’t join a sorority or an activist group. I’ve never done a keg stand or handed out flyers for an event. I basically missed out on a lot of the cool stuff. Here’s what I did get to do:

1. I got to avoid thousands of dollars in student debt. I know, I know. What’s cool about that? No one o

wns me, that’s what. Granted, I have some credit card debt, and a car note. But nothing compared to the average student loan debt, which reached an all-time high of $30,000 in 2013. Yikes.

2. I got to graduate early. My mom was constantly on my ass about my classes. Btw, thanks mom, if you’re reading this. She was always like, “Why don’t you take a maymester at community college?” and “Why don’t you take a few summer classes to get ahead?” in a really nagging voice. I hated it. But now I’m SO GLAD she did it. I graduated a year early. Sure, I had to take some classes at a community college, and maybe that’s not cool to you. But I’d choose a $100 course over a $1,000 course any day.

3. I got to work two jobs. Seriously. It sucked so bad. I was a full-time student and, most weeks, a full-time employee. From waitressing to substituting to being a receptionist, I did it all. The upside is that employers are more likely to hire college grads who worked during school. I read that somewhere, don’t quote me. Anyway, I used that to my advantage in every interview I had post college graduation, and there were quite a few. Employers were always slightly impressed when I told them I worked two jobs while in school. It made me look determined.

So, yeah. I’m 21 and I’ve never been to a frat party or done a keg stand. I didn’t get to be on the NTDaily like I wanted. But I got a few stories published, thanks to some helpful professors of mine. Anyway, that’s not the point. Like I mentioned earlier in my post, I was a substitute teacher. I also interned at a high school my last semester at UNT. And you know what I heard that absolutely made me cringe?

“I’d rather drop out than go to X community college.”

We’ve gotta stop giving universities all of our money. Stop digging yourself into these huge holes of student debt and start making sacrifices. Who cares if you go to community college for two years and then transfer? Your diploma says where you graduated from. That’s it. I don’t regret a thing.

I remember being asked in kindergarten “What do you wanna be when you grow up?” I said a teacher. Because it was a teacher who asked me. I think it was middle school when I fell in love with Harry Potter and decided that I should be a best-selling novelist and write fiction books about whatever I was into at the time. Then in high school I decided that wasn’t realistic enough, so I would settle on being a journalist or news reporter. Not once did I say, “You know, it would be cool to tweet for a living.” or “Hey! I love Facebook, I wonder if I can get paid to post statuses.” But that’s what I’m doing. I’m 21, a college graduate. I got my BA in Journalism from the University of North Texas and I got offered a job just a month after graduation. Essentially, I’m the social media voice for the company that I work for. And I love it. 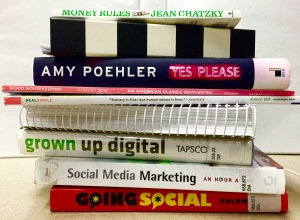 I’m Generation Y. I’m a millenial. I am who every company is beginning to target. Banks, credit unions, restaurants, fast food. They want me, they want us. So here I am, tweeting and posting on social media, something my superiors aren’t fond of, for a living. My job is to create engaging content that gets the company attention on social media… targeting Gen Y. This is easy since a majority of users are Gen Y. I don’t have any specific guidelines to abide by, in fact, I created some guidelines myself. Most of my job is entirely up to me.

I’m not sure what my goal is on here yet. Perhaps I’ll blog advice on social media and gaining followers. Perhaps I’ll use this as a means of advice or inspiration. Who knows? But I’ll be back.